It’s another snow day today. Vancouver in all its vibrancy has succumbed way to easily to the dampening effect of a thick foot-and-a-half of snow (possibly an exaggeration, but then how accurate is a ‘foot’… I mean really?).
I am LOVING it.
Actually a foot-and-a-half might be a bit of an understatement, it is quite literally blizzard-ville out there. Everything has become so blanketed in white that everyday objects are outside floundering around in existential fits having lost all meaning, shape and form. Needless to say I almost joined them when after walking a block-and-a-half in a zigzag pattern I became completely and utterly disorientated. It only made matters worse when the snow-covered fire hydrant I thought was beside me, stood up, shook the snow off it’s coat and happily bounded off in the opposite direction leaving nothing but a trail of yellow snow and paw prints in its wake.
I honest-to-god passed  people skiing down the road while out taking photos earlier.
I have no other explanation for this bizarre turn of events than that I was obviously smoking mushrooms before going to sleep again and woke up embedded in a Lewis Carroll novel. Of sorts. 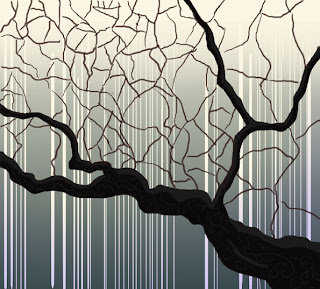 Labels: snow, Vancouver, winter
It’s 10:01pm and I’m sitting cross-legged on the swarthy $30 air mattress that’s served as my comforter for the better part of a year. Actually that’s a lie. Or two. The mattress is neither swarthy (it’s mach 2 after the sudden and distressing death of my first) nor is it really all that comforting. Truly, if the dark and swollen circles beneath my eyes are anything to go by, then ’comfort’ is a cluster of curves and angles I really can’t properly associate in any way, shape or form with this lovely plastic prison of stale air.
Regardless, I am sitting on it cross-legged… as has been established… and staring at a relatively blank screen. That’s it. I’m here. I am actually contemplating crossing the threshold and joining the blogosphere.
God help us all.
Posted by Mel Cook at 11:22 AM No comments:

Mel Cook
I dabble in comics, concept art and self-delusion.