Here's a coloured version of Kaiju Band!
I've not been wanting to post it because I was hoping to re-colour it for Threadless (they require a max. of 8 colours only), but on special request, I've uploaded the current version to the blogosphere.
Enjoy!

Back from the dead...

I'm a bit late to the cards, but hey. First post for 2010! Yay.
Nothing much to take note of. Have moved to Sydney. It's humid. And there's a house of opera next to a really large bridge.
I move into my new place next weekend, from whence I shall get right back into the regular programming ('regular', that's a joke right?). But until then, I thought I'd leave a place-holder. A couple of digital paintings I did for some friends over Christmas, which was oh-so-long ago now.
Til then chickens.

It was recently brought to my attention -- and by recently I mean six months ago, and when I say 'brought to my attention', I really mean 'dredged up from the viscous swamp I call a memory'.
So scratch that ...
Six months ago I was reminded of the fact that I have no style. It was a Thursday. I was entertaining the prospect of enrolling in an animation school and the rather frank, though not entirely unpleasant Director stated that while I can on occasion draw and such, I actually have no style. He may have sugar-coated it a bit more than that, but I forget. My mind has no room for extraneous details.
What he said though was true, I am still an artist very much in search of a style. Actually, I still have trouble considering myself an 'artist', I'm really just someone who likes to doodle in pencil a lot. Doodle. Such an odd word. But in that vein, I had some time spare this evening and decided to try my hand at developing such a thing. Via doodling.
I took a photograph, this one, and did a short 90 min exercise in pencil where I replicated the image a number of times, each time moving further away from a straight realistic representation. The results are below:

The last one's just silly, but hey, you've gotta go as far as you can go right? Sometimes even to the edge of 'crazy'.
I'm tempted to try the same exercise in colour, but all my colouring points are currently being utilised by the comics I'm working on. And besides, before I colour anything else, I still have to add colour to that Rock Band pic. *sigh*maybe if I slept more I could actually work more. That seems counter-intuitive and yet oddly promising.
Anyway, if anyone else would like to have a go at re-interpreting the above image in their own style (in whatever medium), give me a heads up and I'll do a follow up post.
Otherwise I shall end off with a few more of my random sketches.. Goodnight everyone!

... it would seem that a significant amount of awesomeness has been bubbling and brewing around some of my fellow comics creators, whilst I've been AWOL...
Average Joe artist Kelvin Chan has been featured in this month's issue of ImagineFX which should now be bought by anyone and everyone who reads this blog (yes, all three of you. That sounds like a joke but it's not :D
He walks a fine line between pure genius and possibly mentally deranged, but Cy Dethan, author of such mind-fucks as Cancertown and upcoming The Indifference Engine is being interviewed next week on an episode of Comic Book Outsiders. I will post deets when I get them!
Creative Director for Insomnia and Letterer extroadinaire Nic Wilkinson was also recently interviewed on Comic Racks where I believe she discusses a topic very close to my own heart - Rock Band! And because no blog post is complete without mentioning it at least six times - Rock Band Rock Band Rock Band Rock Band Rock Band.
Well, podcasts seem to be the theme for the week, so just to continue it would seem that Cancertown artist Stephen Downey and author of Kronos City, Andrew Croskery were recently interviewed on Sunnyside Comics, a comics podcast from Belfast Ireland. And as if that wasn't enough, Stephen also has an 8 page story featured in Bob Heske's upcoming 2012: Final Prayer Anthology, written by Bob Heske himself. Which I personally can not wait to read.
Closer to home, a short 6-page comic I worked on with the duo of awesomeness Shamere Borg and Xander Bennett has also been selected to take part in Bob Heske's 2012 Anthology. Yay!
Phew! That was a lot of info in a short amount of time!
Posted by Mel Cook at 4:59 AM 1 comment:

And here's another piece I did while away, 'commissioned' by my good friend Xander Bennett

For those who can't aptly decipher my scrawled inks, it's the ultimate RockBand configuration according to Xander. Godzilla, Mechagodzilla, King Ghidora, and Mothra. But in black and white. I hope to have a coloured version up by the end of the week. Hopefully in a style similar to this perhaps.
Speaking of ConceptArt.org, I also now have a gallery there, which can be found here.

Lacking Substance? The Filler You Ordered is Below.

Well I've finally returned home, leaving the warmth and sun of California for the stormy winter weather of Perth, and about a three-week backlog of work and emails to catch up on.
To counteract the fact that I'm a) a tad busy and b) mostly lazy, I decided that instead of giving you the blog post of awesomeness you so rightly deserve, I'd fake it and just post up sketches... of nothing in particular.
So below... sketches I did whilst away... with more to come.
We will return to our regular programming shortly. 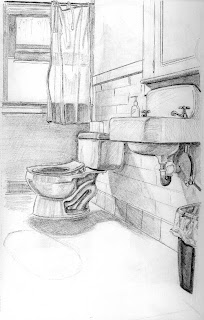 I actually survived the Con. Thank god.
Should anyone so desire to know how, there's a brief write-up I did which can be read here on the Insomnia blog.
I will be returning home from LA this weekend and shall post up art from the last two weeks then. Yay.
Posted by Mel Cook at 1:14 PM No comments:

Mel Cook
I dabble in comics, concept art and self-delusion.